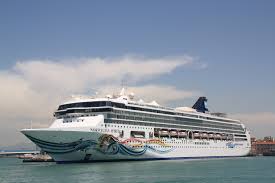 A few words from our friend: This summer I had the pleasure of watching a bunch of escape rooms happen as I took an unexpected internship at an escape room facility. The popularity of escape rooms is soaring to the seas! I got to watch as strangers came together to have fun and solve crafty puzzles in order to escape whatever scenario they were cast into. Watching as people who only just met come together and work to solve problems was amazing. Let me tell you what fun we all had, these rooms were located on a Norwegian cruise ship and featured many different themes. The internship lasted only two weeks, but I wouldn’t trade this experience for anything.

We boarded the ship on a Monday morning and the first thing we did after we got settled in was head to the rooms to setup and prepare for our first round of guest. I was a bit apprehensive at first because I’ve never run an escape room before, but the first game went amazing. I know what you’re thinking it went off without a hitch right? Wrong, we got a chance to test run the game before the first group arrived so I thought I was read for whatever weird and off the wall thing people would come up with, but I was so not ready for this. I learned the creativity of what people can come up with on their own cannot be matched by anything.

So why did I say the game went amazing? Because even though some people didn’t escape our rooms everyone who came had fun. I learned that while its fun to escape the real fun of the game comes from the experience you have during the game with your friends and family, and the new people you get to meet during your time. On a cruise ship you constantly see the same people repeatedly for different activities, so we made a lot of good friends because of the amount of fun we had helping people escape and solve problems. The popularity of escape rooms is soaring to the seas! Bringing people together this well is something special and I will always remember my time aboard Norwegian cruises. Book your experience now and discover why escape rooms are so much fun!