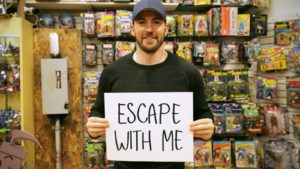 Captain America loves escape rooms. Escape rooms are becoming more and more popular in the media as the years go by. What started out as something fun to do with your friends and family (and still is by far one of the most fun things to do), has now grown more and more active within our pop culture. Movies have been made about escape rooms. Even popular TV shows have begun to place their well-known characters into escape room scenarios, so we can see how the character we love will try and solve puzzles to escape.

Recently, even high-class celebrities are beginning to use escape rooms as a popular “stint” to help promote material. Chris Evans, most famously known for being Captain America, recently helped run an escape room inside a comic shop to help promote a charity he was doing. One lucky winner who donated would go play an escape room with the Cap himself. I’m sure many people attempted to seize that opportunity because the idea of being locked in the room solving puzzles with a celebrity like Chris Evans does sound like an interesting and fun time. That’s right, Captain America loves escape rooms.

So the more and more escape rooms grow into pop culture, the more and more interest we see in groups wanting to play an escape room. They may want to see if their skills match or are greater than the people they have seen play on TV or in the movies. Well luckily, we offer four unique and challenging real life escape rooms for you to try. So be sure to make your reservation today! Urban Escape Games is easily accessible to a majority of Metro Atlanta. You can make your reservation online or give us a call! We look forward to seeing you (and maybe even a few celebrities) stop by and test your skills soon!